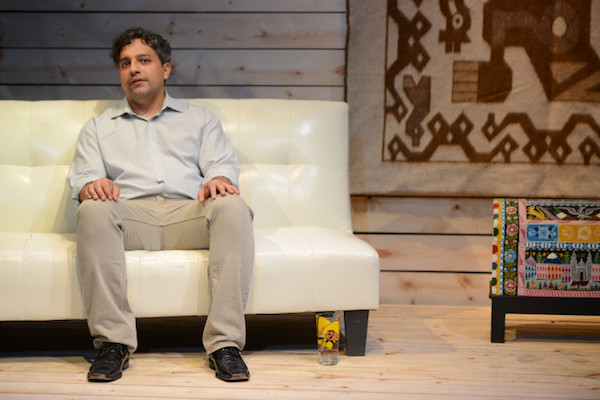 Mical is a dear friend of mine. It wasn’t always that way, just a recent discovery. By recent, 6 months but little did I know, it was a year and half in the making. It all started when I joined Dane’s Body Shop. After a year of working out in the same class together, we slowly became friends and instantly I felt like I had known him for years. He is a talented actor and recently performed a one-person show, which turns out to be his proudest moment. His story in his own words…

My name is Mical Trejo. My proudest moment happened nine times in three weeks and took six weeks to prepare for.

Allow me to explain. I’m an actor and in the spring of this year a good friend of mine sent me a script he wrote with the intent that I would perform it. This play was in fact a one-person show. I’ve done a one-person show before, so I knew what I was getting into. But this was fifty-four pages of a very rich and moving story. At times hilarious and other times wonderfully poignant. This was going to be a massive effort from me that would require loads of focus and discipline. Did I think I could do it? Yes. Did I know I could do it? Maybe.

Fortunately I worked with a director who I am very comfortable with. I listened to his guidance and encouragement. There were only two moments throughout the entire process that I asked myself “What have I gotten myself into?” After weeks of rehearsal and line repetition, I was ready. I was more than ready, I was excited!

To put this into perspective for non-performers, this is akin to an athlete preparing for a marathon. Or something slightly more ridiculous, like a Tough Mudder or Spartan Run! Think any endurance event where you are one moment away from failing miserably and likewise one moment away from rising to the occasion. It’s this delicate balance that actors live for. It’s our version of thrill seeking.

All kinds of thoughts dance through your head while you are on stage acting for an hour in front of an audience. You think about the words you are saying, the people in the audience, your groceries at home, your spouse, your cats, and in my case…my socks. I wore a pair of Pride Socks for every performance for two reasons. First, to look down at my feet and read “I am proud” before every show meant something to me. It was motivating and positive. Secondly, they are just so darn comfy. They are the most comfy socks I own.

So, nine performances later I can look back and say I got to live out my proudest moment to date in front of packed houses to humbling applause. All done while standing firmly on a pair of inspiring socks.